An Jae Hwan found dead in his car 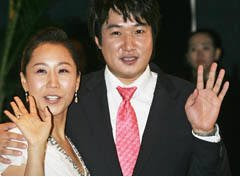 I was shocked to hear the news this afternoon about the death of An Jae Hwan (real name: Ahn Kwang Sung). A 36-year old Korean actor who found dead in his car this morning. A witness found his car that was park on the road in front of a villa and called 112 (a number when calling a police). The police officers found 2 bottles of Korean alcohol, 2 briquettes (a small hard block made from coal dust and used as fuel) that were found burned inside the vehicle, possibly contributing to cause of death and 2 suicidal notes telling that she's worried of his wife (Jeong Seon Hui) so he's asking the people to give more support to her. His wife is one of the most famous comedian in Korea.

An Jae Hwan and Jeong Seon Hui has just got married last November 2007. They have been married for less than a year. The media don't know yet the reason of his committing suicide but they think there's a connection to the failure of his new business.

It's really shocking to hear news about the death of famous people specially if it is about the suicidal issue.

Condolence to his family and may he rest in peace.

All in Korea, Only in Korea

My Travel Around the World

This policy is valid from 22 April 2010 This blog is a personal blog written and edited by me. For questions about this blog, please contact idealpinkrose (idealpinkrose at gmail dot com). This blog accepts forms of cash advertising, sponsorship, paid insertions or other forms of compensation. The compensation received may influence the advertising content, topics or posts made in this blog. That content, advertising space or post may not always be identified as paid or sponsored content. The owner(s) of this blog is compensated to provide opinion on products, services, websites and various other topics. Even though the owner(s) of this blog receives compensation for our posts or advertisements, we always give our honest opinions, findings, beliefs, or experiences on those topics or products. The views and opinions expressed on this blog are purely the bloggers' own. Any product claim, statistic, quote or other representation about a product or service should be verified with the manufacturer, provider or party in question. This blog does contain content which might present a conflict of interest. This content may not always be identified.